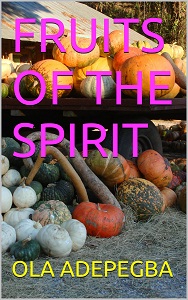 FRUIT OF THE SPIRIT

Apostle Paul in his letter to the Galatians urged the Galatians to walk in the spirit in order not to fulfil the wrongful desires of the flesh (Gal 5:16). He then enumerated eight virtues he described as the fruit of the spirit. He strongly believed that nobody exercising those virtues can be guilty of any offense. And indeed, a deep study and analysis of those virtues as used by Paul shows clearly that against them there is no form of condemnation. What are these virtues and how important?

NO LAW IS AGAINST SUCH

From the ancient days to the modern day, the laws governing people have significantly varied from place to place. The law of a particular land may look strange in another land and many laws in the past have been described as being too harsh on the people. Imagine a woman executed by stoning in Israel just because she was trying to prepare food for her household on a Sabbath day. A lady was reported to be sentenced to prison just because she did a wrong hairstyle for a bride during the Calvanists’ reign in Germany. During the Shaka Zulu’s reign in South Africa, penalty for lying or even mistakenly giving wrong information was death sentence. And the present day laws in some countries look funny or strange in other countries. For example, while fathers freely share cigarettes among their household members, in some countries, smoking is a criminal offense in many other countries. Alcohols are drunk like water in some countries while it is prohibited in others. Many countries have legalised abortion today while some countries have sent a lot of their citizens to jail for carrying out abortion. South African government will legally join two people of same sex together as couple while Nigerian government will send them to seven years imprisonment. While the law of many countries does not permit a man to marry more than one wife, a woman can marry two husbands at a time in India. You may not know that:

It is illegal in France to name a pig Napoleon

Bathing is prohibited during the winter in Indiana.

In Hartford, Connecticut, it is illegal to kiss your wife on Sunday.

In Singapore, it is illegal to chew gum.

In Cleveland, it is illegal to catch mice without a hunting license

A barber is not to advertise prices in the State of Georgia.

In New Jersey, cabbage can’t be sold on Sunday.

In North Carolina, it is against the law for dogs and cats to fight.

In Michigan, married couples must live together or be imprisoned.

In Nigeria it is illegal to spray the country’s currency on celebrant’s forehead during celebration.

In Missouri, a man must have a permit to shave.

In England it is illegal to die in the Houses of Parliament.

It is an act of treason to place a postage stamp bearing the British monarch upside down.

In San Salvador, drunk drivers can be punished by death before a firing squad.

In Iowa you must not kiss your lover for more than five minutes.

In Massachusetts snoring is prohibited unless all bedroom windows are closed and securely locked.

In Oklahoma females are forbidden from doing their own hair without being licensed by the state.

In Lagos Nigeria, it is illegal for a motorcycle to carry a pregnant woman.

In Texas it is illegal to take more than three sips of beer at a time while standing.

A betrayed wife is legally permitted in Hong Kong to kill her adulterous husband, but only with her bare hands. She may, however, kill her husband’s mistress in any way she pleases.

In Somalia, it is illegal to carry old chewing gum stuck on the tip of your nose.

In Vermont it is obligatory for everybody to bath on Saturday night.

In Delaware it is against the law to sneeze in an airplane.

It’s illegal to buy ice cream after 6 PM in Newark, New Jersey unless you have a doctor’s note.

It is illegal in Pennsylvania to sing in the bathtub.

In Eureka, Nevada men who wear moustaches are forbidden from kissing women.

In New Jersey, it is illegal to slurp soup.

In Omaha, Nebraska, if a child burps during a church service his/her parents may be arrested.

In Hartford, it is illegal to educate dogs.

In Waterville, Maine, it is illegal to blow one’s nose in public.

In Arkansas, a man can legally beat his wife, but not more than once a month.

In Chicago, Illinois, it is illegal to fish in pyjamas.

In California it’s against regulations to let phones ring more than nine times in state offices.

In the country of Turkey, in the 16th and 17th centuries, anyone caught drinking coffee was put to death.

In ancient times, any Japanese who tried to leave his homeland without permission was executed on the spot.

In Los Angeles, years ago it was legal to cook in your bedroom, but illegal to sleep in your kitchen.

Certainly, we are all not governed by the same law and characters that are permitted in one land may be an offence in another land. Yet, throughout the history of mankind, there are some acts that have never been condemned and will never be condemned. Apostle Paul called them “Fruit of the spirit”, against them, he said there is no law. What are these virtues?

FRUIT OF THE SPIRIT

But the fruit of the spirit is love, joy, peace, patience, gentleness, goodness, faith, meekness, temperance: against such there is no law. Galatians 5:22 & 23.

Apostle Paul in his letter to the Galatians urged the Galatians to walk in the spirit in order not to fulfil the wrongful desires of the flesh (Gal 5:16). He then enumerated eight virtues he described as the fruit of the spirit. He strongly believed that nobody exercising those virtues can be guilty of any offense. And indeed, a deep study and analysis of those virtues as used by Paul shows clearly that against them there is no form of condemnation. What are these virtues?

Love is the first virtue Apostle paul gave as the fruit of the spirit. The exact Greek word used by Paul was “Agape” – it means unconditional love. Love not based on previous act or future expectation. It is a kind of love that gives without expecting anything in return. Jesus Christ says “But I say unto you, Love your enemies, bless them that curse you, do good to them that hate you and pray for them which despitefully use you, and persecute you” (Matt. 5:44).

This kind of love as described by Apostle Paul in the book of First Corinthians chapter 13, bears all things (just or unjust), endures all things (bearable or unbearable), it does not seek its own, it is not provoked (doesn’t get angry), it does not keep records of evils done against it (forgives readily), it thinks no evil (not to talk of doing it) and does not rejoice over iniquities, rather it rejoices in the truth. Paul recommended that Christians should follow love before desiring spiritual gifts (I Cor. 14:1).

What a blissful place our earth would be if everybody truly loved their neighbour in this unconditional way. Jesus Christ summarised the entire law governing mankind into two laws of love: Love the Lord your God with all your heart and love your neighbour as yourself. (Matt.22: 37 – 40)

The English legendary playwright, William Shakespeare once wrote “You cannot give a law to love for love itself is a greater law”. Certainly, there is no law against love.

Joy is the second in Paul’s list of important Christian virtue. The exact Greek word used by Paul was “Chara” which means “from grace”. The joy here refers to the joy from God. Joy that does not depend on present situation nor derived from human success. “Chara” joy is experienced even in time of tribulation. This is a kind of joy that is based on the belief in the vanity of the earth and assurance of the glory of the kingdom of God. Every Christian filled with this kind of joy will count all worldly things as nothing and fix his eyes on the glory of the Lord. Knowing fully well that God is on his side. He will be happy in the time of surplus and in the time of want, in the health and in sickness. He will endure all situations and circumstances. The joy of the Lord will always be his strength (Neh. 8:10).

The third virtue is peace. The Greek word translated to peace was “Eirene”. It means wholeness or completeness or settled in the soul. Peace here is more of an inward condition than an outward condition. It is more of the way you respond to things than the way things happen to you. It does not mean that things are happening perfectly or orderly but it means you are handling situations perfectly and orderly.  Being at peace or not is a decision you make, not a circumstance that befalls you. Even in the time of war, you can be at peace and in the time of peace you can be in chaos. Someone with “eirene” peace is calm irrespective of the situation surrounding him. Paul suggested that Christians should react peacefully to all situations, he says “Follow peace with all men” (Heb. 12:14 ). What a nice place to live our earth would be if everybody reacts peacefully to all situations.

The Greek word translated to patience was “Makrothumia” which means lenience and long suffering. It’s Latin equivalent “Longanimitas” means “endurance”. It connotes bearing injustice even when you have the power to revenge.

There are no reviews yet.

Be the first to review “FRUIT OF THE SPIRIT” Click here to cancel reply.