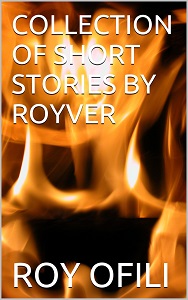 . A COLLECTION OF ROYVER’S STORIES

THE SWEARING – IN DAY

The senator-elect took a few deep breaths and tried to calm the pounding in his chest. This was it! This was the final stage. He sat,looking outwardly calm in his pure white lace material, gold watch, gold necklace and a heavily encrusted gold ring on his index finger. His shoes shone with a resplendence that was unequaled even among his peers. He exuded his own sweet atmosphere, the perfume he was wearing had been ordered from Italy the day before. Things were going very well in fact. Now, if he could just cross this last hurdle…

The chief whip continued his fervent speech, spittle sloshing out of his mouth every once in a while. The senator elect sighed inwardly. Things had changed. In the old days a fellow like this couldn’t have been made chief whip, couldn’t have even smelled the hallowed grounds of this honorable assembly! Unfortunately, recent happenings had forced the erection of new laws, new “standards”. And the people had accepted. And now it was law. He sighed again and willed his heart to be still. The native doctor he had visited the night before had promised him that all would be well…

The chief whip had finished his speech. He slammed the holy mace on the ground and the noise reverberated like thunder in the now silent room. This silence in itself was a new development. What was initially a rowdy gathering, where shouting down your opponent was the order of the day, where weapons were on occasion used freely, was now comparable to a holy chapel. Few voices were heard and when they spoke, there was no interruption until somebody else held the mace of speech. It reminded one of an ancient Red-Indian ritual in which a “talking stick” was used. Among the Red Indians of Old America, when they held a meeting, it was only the person holding the “talking stick” that was allowed to speak. After his speech he would pass the “talking stick” unto someone else who would either support or raise a counter motion to the topic under discussion. Thus was the way the senate now operated and even though it was crude, Order had never been so beautifully orchestrated.

The senator-elect felt his heart pound harder within his chest. The chief whip was pointing his mace at him.He got up majestically, and with applause and whispered encouragement from his supporters, he walked down to the center of the podium. Here, surrounded by his peers, he would take the oath of office.

The chief whip, who doubled as the Chief priest, motioned with his hand and the sacred stone was brought by two young men with leaves in their mouths. The stone wasn’t large, seemed the size of a small book, and yet the men struggled and strained with all their might, their muscles bulging under the effort of carrying both the physical and the spiritual. They finally placed the stone on its alter in the middle of the podium and collapsed backward, sweating profusely. The chief priest stared at the senator-elect with wide, fear-inspiring eyes.

“Do you swear that you will support the constitution of this great nation?” He demanded in a firm but ancient voice.

“I do!” The senator-elect declared. There was a hushed cheer from the crowd.

“Do you swear that you will defend the constitution against all enemies?”

“Do you swear that you take this office freely and without reservation or thought for personal gain?”

The ring quivered on his finger. The native doctor had told him this might happen. Nothing to worry about.

“I Do!” The senate-elect declared. The sacred stone started to vibrate and turn a deep red. For some reason he heard his mother’s voice as if they were back in the village. It was far away but its intent was clear. She was telling him to come away from there immediately. Still he hesitated.

“Do you swear that your interest will be solely for the people? That you will remain humble and honorable to the calling of this great office?

His lips couldn’t move. For some reason he could not speak. A murmur rose from the crowd as he struggled to get wind past his larynx. He saw his mother clearly now though he was sure others could not perceive her. She was muttering incantations and covering his mouth with her dry, aged hands. This silly woman wanted to ruin his destiny! Even if what he was about to say was a lie the ring would protect him, didn’t she know that? Hadn’t he explained the whole thing to her a week before undertaking this journey? He struggled in his spirit and broke her hold.

The ring on his finger cracked, broke, and fell off.

He saw his mother fading away, weeping for her already dead son, even as the sacred stone turned a bright red and life ebbed out of him. HE collapsed on the floor and the last thing he heard was the cry of terror among his supporters and a scuffle as the next senator-elect shouted “I no do! I no do again!!

There are no reviews yet.

Be the first to review “. A COLLECTION OF ROYVER’S STORIES” Click here to cancel reply.

No Author assigned to this book